👩🏻‍💼 My wife got promoted

👨‍💻 Another amazing year at work for me

🏠 We bought a house

🤑 We paid off the loan early

We bought a house

My wife and I went for a major decision earlier this year.

We decided to buy a house with a little loan. We both agreed to live below our means and push ourselves really hard to pay it off within a year. We did it in 8 months 🔥

The fact that my wife got promoted also did help speeding it up.

Push for Kubernetes adoption at work

I pushed for Kubernetes adoption with my current company and it finally went live later in July. We switch from the classic on-demand instances over to spot instances mixed with reserved instances and Kubernetes for wordload orchestration. EC2 cost reduces more than 50 percent as the result.

I did two talks this year on cost saving optimization with Kubernetes. Actually, I wrote one keynote talk and gave it twice.

The solution is basically Spotinst but available for small and medium size business without 30% cut from Spotinst.

Speaking plan for 2019: maybe 3 or 4 talks. Maybe “Cost saving optimization with Kubernetes and spot instances” for the last time and something new.

Over the years, I customized my keyboard layout a lot (Bootmapper client then and QMK Toolbox now) and this is what I ended up using. It’s pretty much HHKB layout with some QMK hacks on top.

CAPLOCK is useless to me so I change it to CTRL. I also set it up to use Mod-Tap key which will act as CTRL if I hold it but works as BACKSPACE if I tap it.

If I press Fn+CAPLOCK, it’s gonna be CAPLOCK as normal. Though I don’t use it, I just want it to be consistent.

This has a major benefit that I can do BACKSPACE by using my pinky finger instead of moving my right hand out of position.

The idea of SpaceFn is you will use SPACE as your layer switching key because it’s easily accessible all the time when you’re typing. You can read more about SpaceFn here.

While it sounds cool and all, the problem araises when you type fast, the SPACE key sometimes will be registered as layer switching key. You could reduce the wait for hold delay but I could never get accustom with that. This problem is quite severe becase SPACE is frequently used.

So I ended changing this layout a bit to a what I call EscFn layout where the ESC key is the layer switching key. The ESC is now LT(1, KC_ESC): hold for layer switching and still ESC on tap. I also enable RETRO_TAPPING so that in case I hold and release ESC without pressing another key, it will send ESC anyway.

This is better because:

Also, I don’t setup the whole thing, just the arrow cluster and HOME/END keys. Even though I’m using amVim with VSCode but there are still many apps which requires arrows for navigation.

I still keep the WASD as arrow cluster for “backward compatible”.

This is essential if you’re using macOS.

If you’re using a 60% keyboard, or any other layout with no F-row, you will have noticed that there is no dedicated Escape key. Grave Escape is a feature that allows you to share the grave key (` and ~) with Escape.

This is godsend if you’re using 60% keyboard.

The Mod-Tap key MT(mod, kc) acts like a modifier when held, and a regular keycode when tapped.

I use this to setup right shift to be TILDE on tap and RSHIFT on hold as normal.

This feature is very useful for those modifiers like CTRL, SHIFT and ALT because you probably never tap those keys.

Essentially, when you tap Left Shift on its own, you get an opening parenthesis; tap Right Shift on its own and you get the closing one. When held, the Shift keys function as normal. Yes, it’s as cool as it sounds.

I don’t quite understand the need for this actually. It’s cool still.

Tap the Shift key on its own, and it behaves like Enter. When held, the Shift functions as normal.

This one kinda make sense though because it’s next to the ENTER key. To be honest, they could have use SFT_T(KC_ENTER) to achieve the similar result.

Try holding Space + Backspace as you plug in the keyboard. Credit to @braidn

Fastest way to transform XML to JSON in Node.js 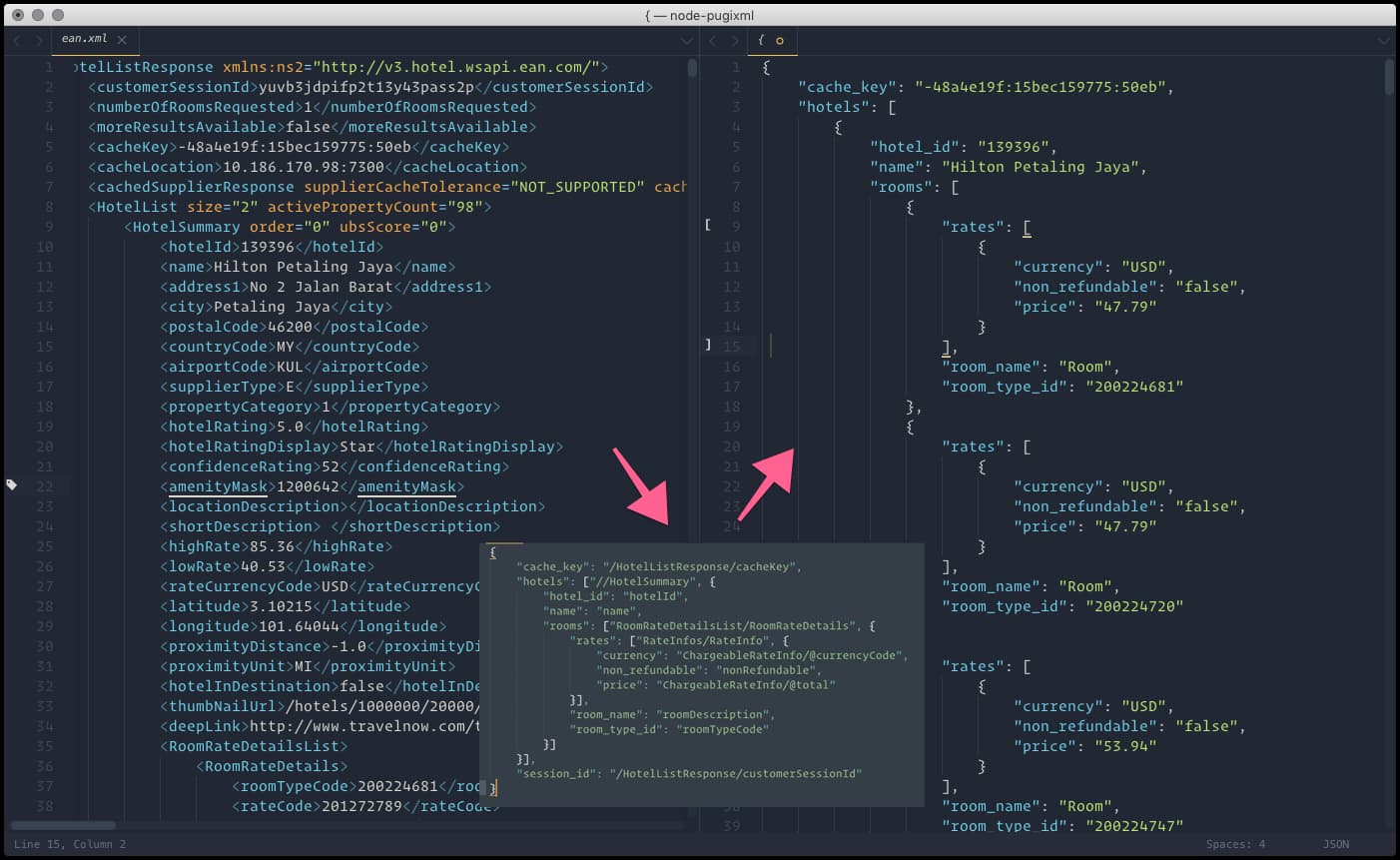 And the benefits of camaro is that not only it’s fast, it does the transformation for you as well. So you can just write a template and camaro will spit out the ready to use object using the schema you specified in the template.

At the time when I wrote this, there were already many XML parsers but there ain’t many which provide a way to support transformation. camaro was born from that constant need of transforming big XML files into JSON in Node.js.

I was reading a blog post from Chad Austin about the fastest JSON parser. I was working exclusively with XML at the time so I asked him what about the fastest XML parser. He replied me that problem is already solved with pugixml by Arseny Kapoulkine.

pugixml looks very good from the benchmark. The only thing I can complain about it is the lack of streaming support, which I don’t really need at the time so it’s no big deal for me.

So a few dozens line of code for the transformation to glue pugixml with node and a couple of hours later, camaro was released. Just like that.

So I was going through this post from Instagram Engineering blog while researching for some sharding solutions.

The solution is quite elegant and I decided to port this to MySQL.

Turns out, it’s harder than I thought since we’re using a pretty dated MySQL version at work. There is no sequence, just AUTO_INCREMENTAL. In order to use the code snippet for PL/PGSQL, I would have to find a way to mimic nextval function.

So the snippet above is what we use to mimic the nextval function. Quite troublesome huh? you can now call SELECT nextval('my_sequence') if you want to get next val of the sequence .

In order to generate an unique id with sharding info, you can do just this select f_unique_id()

Set and sorted set are extremely powerful data types for filtering and sorting stuff with redis.

Let’s start with something simple. Usually filtering is just a matter of union and intersection. Let’s say: filter all hotels that are 3 or 4 star and have both spa and pool.

For this, we just have to create a set for each of the filter criteria and do union/intersection accordingly.

Suppose we have the following data

As with the above example, it would be [UNION of (3,4 star sets)] INTERSECTION [ INTERSECTION of [spa, pool]]

Usually, in SQL, you can do multi columns sorting like this

How would you translate this logic to redis?

Actually, this is not my idea but Josiah Calrson’s (author of Redis in Action book). You can find his blog post about this and demo implementation there as well.

The basic idea is: ZINTERSTORE command supports WEIGHTS so we just have to calculate the weight for each column base on their order and sorting direction (ASC, DESC).

If you know the range of the filter criteria in advance, you can save 1 round trip to redis to fetch it.

One thing to note is that this approach doesn’t work well with non-integer values in mind. You can work around that by converting them to integer. For example, you can convert a non-integer values range from 0 to 10 with precision of 2 by multiplying the value with 100. Something like below:

Some personal notes while working with GraphQL

My slides from Kubernetes Meetup #2 organized by Docker Hanoi and CloudNativeVietnam.

The Birth & Death of JavaScript

This science fiction / comedy / absurdist / completely serious talk traces the history of JavaScript, and programming in general, from 1995 until 2035. It’s not pro- or anti-JavaScript; the language’s flaws are discussed frankly, but its ultimate impact on the industry is tremendously positive.